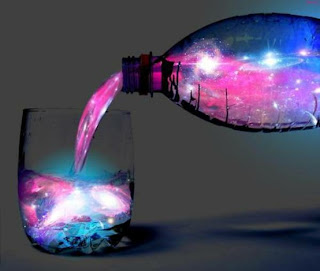 Aurora is TCCs black light phosphorescent take on jungle-juice. Originally conceived in 2006, it is a drink that is pink in natural light, but glows aqua-marine in black-light. Thus, it represents the two main colors of the aurora-borealis. So, without further ado here is the recipe. (Originally, the drink was made with just pink-lemonade, but was later modified to use Rose's Mojito Passion).
WHAT YOU NEED
2 liters Gin or Vodka9 Liters Tonic Water3-4 Bottles Roses Mojito Passion, OR 3-4 Canisters of Pink-Lemonade ConcentrateIce
INSTRUCTIONS
Mix all ingredients together shortly before the party begins.Add ice as late as possible before drinking. 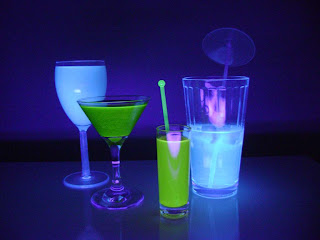 To make drinks glow in the dark, you will need:

These steps work better if they are followed in order.
The keys to great glow in the dark drinks are the lighting, the tonic water, and the cups. Be creative and have fun.
Posted by Unknown at 8:14 PM